Vedran Karadža Tabulov is a certified painter-graphic artist and a visual culture teacher. In addition to painting and graphic art, he is also engaged in the art of assemblage in which he has achieved high results in works of recognizable expression. For the time being, his latest series encompasses some thirty objects produced by compiling items from manufactural, industrial and biological waste. He has once again remained consistent in his choice of materials and the conception of sculpture, as he continues to be occupied with the reconstruction of already made objects and with their transposition into sculpture, from the realm of nature and the realm of technology into the realm of art. The process includes construction and sculpturing. It is more than mere arranging and assembling of waste.

The conceptual principle underlying his assemblages is the contrast between various objects and materials, as well as all kinds of inversions, ditractions, transposals and dislocations, whereby the objects are deprived of their ordinary functions. That is what gives rise to interaction, tension and conflict marked with strong symbolism and metaphorical character, which are qualities particularly emphasized in this new series of works. The strength of his works lies exactly in the interrelations and the suggestions that they emanate. Familiar objects have been put into unusual context which is shocking, and whose hybrid does not support reality but encourages expression. They function as some sort of old instruments, objects with genetic disorders and functional ambiguities. Alchemical motivation can still be felt in his works, although this time it is merely initial. What is worth pointing out is the psychological and social connotation of his art. It is well manifested through the metamorphoses of objects with utility values, reminiscent of the kafkanian transformations concealing the sensitive psyche of the contemporary man before the danger of the chaotic world.

In his new series, Vedran Karadža Tabulov silences the directives of aesthetics. Instead of making pretensions to completeness, precision or generally close attention to plastic language, his assemblages open up a space which indicates the existence of a deeper understanding not only of form, but of its meaning and purpose as well. While counting on the observer's perception as an integral part of his work, the author sets the requirement for careful reading, attempting to find the keys to the meaning of each individual form exposed to our view. This is largely contributed by the titles of the works, which as the author says 'forewarn, admonish, anticipate, but also express aspirations, celebrate and mock'. We would indeed be mistaken if we spoke all these words with a deadly serious face and if we left the element of ludic playfulness out of this sight.

Vedran Karadža Tabulov is an example of an artist who visibly takes delight in the variety of shapes, materials and procedures, relying along the way on inspiration and lucky moment, but at the same time retaining full control over the creation. What he values is the very work process, which can occasionally be difficult, time-consuming and painstaking, but the result is eventually achieved. It is characterized by curiosity, imagination, and above all fierce primary instinct, as well as strong creative willingness and volition. And we all know that it was art historian Max Dvorak who a long time ago theorized about the artistic volition as an important component and presumption of a work of art.

Vedran Karadža Tabulov was born in 1977 in Split, Croatia. In 2002 Karadža graduated painting and printmaking at the Academy of Fine Arts in Široki Brijeg, Bosnia and Herzegovina. He lives and works in Drvenik Veli and Split, Croatia.

Conflict of Double Meaning (Double is Easy, but Meaning is Fucked Up), 2014.

Full Glass – A Collection of Impressions, 2014.

All works in mixed media. 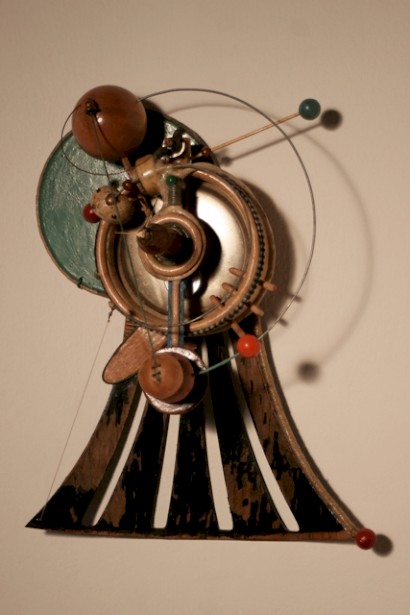 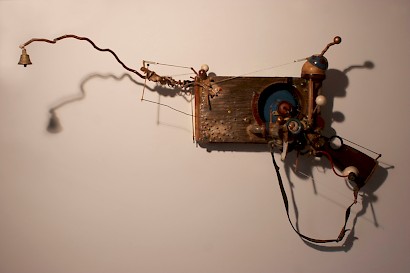